The final video from my July shoots. I made a bit of a muddle of the aspect ratios for this but it’s all part of the learning process. It’s the first video where I’ve recorded the narration/voiceover in the car using my iPhone and with no script or any other prompts whatsoever. It has a more spontaneous feel I think – and lots of “ums”.

I’ve decided not to do a video diary for July, there’s been a flurry of activity during the month, much of it in video form already, so I am happy to let the content stand for itself.  In the meantime here is the result of a recent visit to Ogden Water near Halifax.

In a previous post I discussed a recce shoot at Ringstone Edge reservoir.  Earlier this week when driving back from Buckstones Edge (post to follow, hopefully next week) I noticed a band of cloud ahead and realised it would form the backdrop for a shot to be taken just beyond Ringstone where I’d previously parked. It wasn’t a “miss-it-and-you’ll-always-regret-it” type of shot but would be a useful marker in the sand as it were. It was also quite pleasant to see something in the sky behind the reservoir instead of wall-to-wall grey as I’d had on the recce.

First attempt at some aerial abstracts yesterday. I’m still assimilating what I learnt but one point immediately jumped out at me. I am used to looking at a scene and pre visualising in my head the likely compositions. It is not such an easy task with aerial photos as your perspective is so different. The main image here only revealed itself as the drone reached a hundred feet and watching the composition change as it rose gently up was fascinating.

Water levels were very low at Scammonden this morning – I went hoping to shoot some minimalist long exposures with the Fuji and found the rocks I’d intended using as foreground interest stranded 150 yards from the water!

Last time I was here I got wet feet getting close enough to them in order to compose with the 12mm lens.  Today was a dismal day light-wise but undeterred I felt I should try to make something of the opportunity.  I hoped that there would still be some interesting images to be found from the air.

Unlike the last few trips out I only used the Mavic today. I carried the Fujis but they stayed in the bag so I have no video footage from the Fuji nor stills to supplement the short (3 minute) video I put together this evening. So, the whole episode has been created using a drone and a computer.

I bought the drone partly to try my hand at aerial abstracts and was really pleased that I finally got a chance today to put into practice what I’ve been thinking about for some months now. I will post a selection shortly but in the meantime here’s a flavour of the morning.

There is a tide in the affairs of men.
Which, taken at the flood, leads on to fortune;

This quote, delivered by Brutus in Act 4 of Shakespeare’s Julius Caesar crops up regularly in fiction, from Agatha Christie to PG Wodehouse.  Paraphrasing wildly, I take it to mean that we should seize opportunities and not be afraid to go with the flow.  So this week I did just that.

For weeks, nay months, now I’ve rarely got out with a camera. Something always got in the way be it domestic chores, (grand)child care or, inexcusably, that the weather wasn’t that good. So last week I determined that on the three days when I didn’t “have” to be at home all day I would go out with the cameras for the morning and see what I could come up with.

Bright, sunny, cloudless blue sky. Undaunted, at 7:15am I threw camera and drone in the car and headed for Ringstone Edge Reservoir, not far from where I live in West Yorkshire.. The aim was to scout the location and identify possibilities for future shoots.  My thought was that if I went and explored the access, ascertained parking opportunities, sized up the likely compositions and with the help of The Photographers Ephemeris identified where the sun set and rose I would be better placed when the light was “right” to take advantage of conditions.  I produced a short video for the blog detailing my mornings work.

The outcome? There definitely is potential for both still and aerial photography at the reservoir and I have identified several key vantage points from which to shoot in the future and also noted what conditions are likely to be best at each. It was far too windy for the Mavic to be too far away from me so I contented myself with some aerial landscapes with the drone reasonably close to me, albeit ninety feet above me at times. I found the drone really effective for taking landscapes from around twenty feet up which gives a different perspective compared to a tripod-mounted shot. I will definitely return with both a stills camera and the drone when the opportunity arise.

Harden Beck is a stream that flows from Hewenden Reservoir to the River Aire in Bingley, West Yorkshire.  The beck flows through Goit Stock Wood, which is known for being a good example of broadleaf woodland and cascades over Goit Stock waterfall which is 20 ft high.  The waterfall was known as Hallas Lumb until the early 1820s when its name was changed to Goit Stock.

Tuesday dawned bright and sunny with another cloudless blue sky. Yet, at 7:10am I was bounding out of the door with camera bag in hand and heading for the door. I had been to this location previously but had never approached it from the south before so was accessing the falls from a different angle.  In the end I shot mainly video footage on the Fuji X-T20 and produced a short video for this blog but I also managed a few reasonably decent monochromes which were a bonus. So another successful outcome.

Would the impetus see me through the week for the final planned excursion on the Friday? Or would the necessity of being at home Wednesday and Thursday return me to my normal lethargy?

7am. Grey skies, heavy drizzle and a 10% chance of it raining at any given point of the day.  What is a photographer to do when the house is warm and he’s half way through an excellent novel? Why jump in the car of course!

Stopping briefly at a well-known fast food outlet for a breakfast wrap I headed for Ogden Water Country Park & Nature Reserve, also in West Yorkshire.  There are lots of paths to explore as you walk round the reservoir going well up into the woods and beyond but I chose a short circular walk through the first area of woodland and along one side of the reservoir. It was still drizzling steadily when I arrived but I walked to the top of the picnic area which gives a great view over the reserve and happily ate my breakfast and supped black coffee from the flask I had brought with me.

Whereas Monday had been mainly about stills photography and endeavouring to grab some drone footage this trip turned out to be mostly a test of my videography skills.  It was a very productive three hours as I concentrated for the first time on simply shooting for video rather than trying to think about stills and moving imagery. I’ve yet to edit the footage together but I had a quick look this morning and am hopeful that I’ve got the material for another in my “Recce” series of blog posts and associated videos.

So, I really made the effort this week. Identifying three days when I had the opportunity to get out of the house with my cameras and making sure I did just that. It’s too easy to take the easy option and sometimes we do need to seize the day as it were. It’s Saturday as I write this and I am already looking at the weather forecast for next week. Once again I am going to be free to wander Monday, Tuesday and Friday next week and Brutus’ words are already ringing in my ears.

Harden Beck is a stream that flows from Hewenden Reservoir to the River Aire in Bingley, West Yorkshire.  The beck flows through Goit Stock Wood, which is known for being a good example of broadleaf woodland and cascades over Goit stock waterfall which is 20 ft high.  The waterfall was known as Hallas Lumb until the early 1820s when its name was changed to Goit Stock.

I’ve been to the waterfall half a dozen times in the last few years always approaching from the north via a lengthy walk up Harden Beck. Invariably by the time I’ve got there the sun has been well up which creates problems with blown out skies above the falls.  Sometimes I’ve spent so long photographing along the beck that I’ve not had much time at the falls themselves before staring the walk back to the car. So I was very pleased to discover recently that there is somewhere to park south of the falls that is just a fifteen minute walk through the woods to get to the falls. There is still the chance to photograph along the beck, albeit a much shorter stretch but most importantly you pass the smaller falls above the main Goit Stock falls and these are well worth photographing.

Bright blue skies, no cloud and bright sunshine – not perfect landscape photography weather in my book but a perfect day for a recce nevertheless.  Ringstone Edge Reservoir near where I live in West Yorkshire is easily accessible yet runs alongside the busy Saddleworth Road. It is a location I’ve passed many, many times but have only briefly stopped at once in all that time. Monday I went out to look properly.

There is potential for both still and aerial photography at the reservoir although on the morning I went it was far too windy for the Mavic to be aloft for too long in the hands of a beginner so I contented myself with some aerial landscapes with the drone reasonably close to me, albeit ninety feet above me at times. I found the Mavic really effective for taking landscapes from around twenty feet up which gives a different perspective compared to a tripod-mounted shot.

All in all a useful recce and I shall be returning when the conditions are right to repeat some of these compositions in better light and in particular the next time we get snow as I think it will produce some magical images with a good dusting of the white stuff. 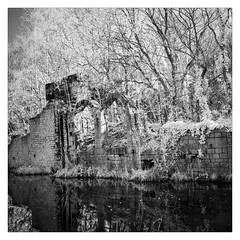 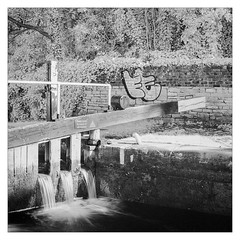 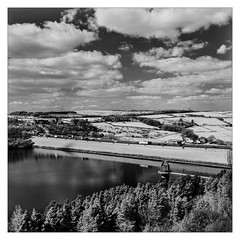