I am sat here following the journey of my Fuji X-T1 on the Royal Mail tracker as it heads its way down to deepest, darkest Sussex and the start of its new life. I’m not sad though as it will be working its way back to me next week hopefully following a successful conversion for “full spectrum” photography which of course will include infrared.
My previous IR camera, a Nikon D80, gave up the ghost last week with a terminal, mechanical malfunction which is beyond economic repair. I’m debating whether to put it out for recycling or plant it with a nice looking succulent.
So, it IS au revoir and NOT goodbye X-T1 and whilst I await your return here’s a reminder of the times we’ve already had together.

Does landscape photography always have to follow the “rules”?

A few images from the couple of hours I spent pottering on Hackpen Hill at the weekend.

There’s a load of different ways to produce a black and white digital image (I shan’t get into film photography today!) and each has its proponents and champions. Each also has its benefits and drawbacks and I have always felt it better to have a suite of conversion tools at my disposal, picking what is appropriate at any given time.

One that I’ve used rarely in the past is the Gradient Map but I came across mention of it when flicking through a magazine this weekend so decided to have another look at it.

Applying a Gradient Map adjustment layer, using default settings and a black to white gradient produces a decent result out of the box with this image taken on the local canal this morning.

For many images I think that this simple method will produce perfectly acceptable black and white images with a great range of tones and the minimum of fuss.

But that isn’t the end of the Gradient Map tools powers as I was finding out the further I read. It is possible to map the colour tones in other ways than simply mapping them onto a continuum form black to white. How about using a continuum from yellow to blue? Stick with it, as this is the basis of split toning and whilst it appears to have fallen out of popular usage recently, at least on photo-sharing social media outlets, it is an extremely powerful technique that can produce some really satisfying images if used properly.

The split-tone version (above) was created using two Gradient Maps and a Levels adjustment as shown in the screenshot below.

The first Gradient Map produced the basic black & white conversion as shown at the top of the page. The second Gradient Map adjustment layer was adjusted so that the tones were mapped on a continuum from blue to yellow (I have not included detailed how-to as there’s lots of demonstration on t’web). At 100% the effect was rather overwhelming but by dropping the opacity down to 29% the toning was much more subtle although it left the image looking a little flat and lacking in contrast. A simple Levels adjustment layer solved the problem bringing the punch back into the image.

Now, toning isn’t to everyones taste but I enjoy having another tool at my disposal and there’s no doubt that used selectively it can be a very effective method of producing variety and creative options. The red/blue toned version above puts me in mind of some of the copper-toned prints I produced in my Mum’s kitchen back in 1978. However, my fingers aren’t stained, I haven’t accidentally bleached a sixteen inch wide stretch of her kitchen worktop and there’s no bottles of toxic chemicals under her sink!

So there we have it. A quick play with Gradient Maps and hopefully some ideas for your own investigations. Enjoy!

I woke up this morning, early and with an asthma attack brewing, but my first thought was not “where’s my inhaler?” but rather “I am going to take an unconventional image for my 365 today”.

This 365-lark rather gets to you after a while it seems! This is my 144th consecutive, daily image since I started last October and Max, the guy who introduced me to the 365 group,  was right when he said that it gradually becomes just a part of your day rather than something you have to consciously think about.

A Lensbaby Sweet 35 is not exactly an obscure lens but then again it’s probably not entirely mainstream either; more of a niche interest. The paucity of sharp elements in these images (there are some, I checked) is definitely against the accepted norm of enthusiast photography though. I was also, basically shooting into a very harsh, direct sun reflecting off the glass and steelwork which definitely flies in the face of perceived wisdom about keeping light behind you or to the side. Then there’s the irregularly sized images in the triptych, they increase slightly left to right with the second being slightly wider than the first and the third slightly wider than the second. I used a fairly hard, dark vignette to really pull the eye into the middle of the triptych too.

I’m going to enjoy reading, and learning from, any comments todays offering elicits!

That restless quality that I’ve spoken of before doesn’t quieten down it seems just because we’ve already taken on a bumper load of new challenges in the past eighteen months.  This need to constantly seek fresh things to do though does cause me some unease. You’ve heard the phrase “Jack of all trades, Master of none”?  I do have a tendency towards being a very competent Jack, which is fine as it ensures I always have something to do and do not have any real excuses for being bored. Every now and then though I do wonder what it would be like to be a “Master”.

But, onwards and, hopefully, upwards!  During the last few weeks of further, enforced house arrest, as I quaintly describe it, I started to dabble with textures and flowers. I then gave in to a long standing itch and bought a Lensbaby. I then went out and purchased some props for future indoor projects. And all the while I’m charging the drone batteries every five days in the hope I can get it out and shoot some more aerial images.

Time at the computer currently,  consists primarily of Photoshop, working on processing the flowers and on learning how to use textures. Time on the iPad is mainly reading on the same subject and of course the occasional blog post. I write most of these posts  using Notes on my iPad and then copy and paste into the blog on the computer, tweak as needed and add any images that are required.

I’m keeping my hand in on Pictures to Exe too. My first submission to the UPP AV Group is with the coordinator and goes out to the group members on 1st April I believe. Having picked the threads of PTE up again after a four month lay off I want to ensure I use the software regularly so I don’t have to keep relearning the basics.  It’s the regular use of software that helps cement the learning for me as I suspect it does for many of us. I also had a quick play in Final Cut Pro the other day, cutting together some time lapses from my iPhone, for no reason other than to keep my hand in.

As (or perhaps if) the better weather arrives so concerns over my chest and lungs will reduce and I will be able to get out for longer periods. The trick will be to keep as many of these activities as possible in play. One idea is to try to combine them if possible. Thus for example, I have an idea for an AV featuring urban landscapes shot with a Lensbaby, which I’ve tentatively called “Urban Blur”. This will incorporate shooting with an AV in mind, something I’ve not yet done, as well as practicing using the Lensbabies and of course using Pictures to Exe together with all the ancillary tasks that necessitates.  The still-life and texture work will need to be actively confined to those days when I absolutely have to stay indoors.

Anyway, enough of my random musings. I guess this post is basically a diary note for myself but the discipline of writing it has helped me to clarify some thoughts in my increasingly befuddled brain.

I promised some blurry images and here they are. All bar one taken this morning on my very first trip out of the house with the Lensbaby Edge 50 optic.  Next misty morning it will be the turn of the Sweet 50 optic!

Unless stated, all images are Nikon D800E with Lensbaby Edge 50 wide open – gotta maximise the blur! Common sense suggests starting with the lens stopped down a little to make focusing easier but I will leave that for another day. Today I just wanted to embrace the blur!

To start though, these first two images hopefully show the creative potential of the Lensbaby Edge. In a “straight” photograph the plane of focus runs across the image. In the picture above taken with a Fuji X-T20 the 20 on the road is in sharp focus as is the 30 on the road sign alongside. Both images are shot from basically the same spot at the same focal length and same aperture (although a few hours apart). In the first image above the plane of focus has been twisted to run vertically along the lamp-post. This is the Edge 50’s unique selling point, the ability to move the plane of focus wherever you like (with practice) around the frame.

This image of a tree clearly shows the narrow strip of focus produced by the Edge 50. Nikon D800E and Lensbaby Edge 50 wide open. With the image open in Photoshop I applied a High Pass layer on a fairly large radius to show where the focus lies.

Anyway, lecture over, here are the rest of the images from this morning wander around the block just as the mist was starting to clear. It’s an eclectic mix but all shot within a few hundred yards of my front door. 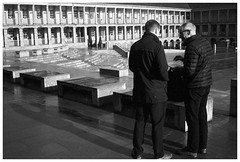 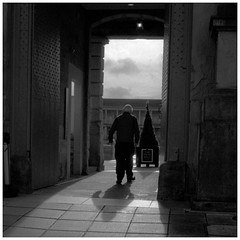 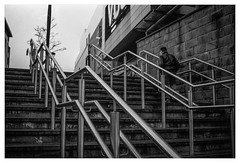