If you are a film photographer you probably know what Kentmere 400 is. If you are not however I shall explain.

Kentmere 400 is a fast speed black and white camera film which is suitable for all aspects of general purpose photography, and is capable of generating high quality images.  Being rated at ISO 400, it makes it particularly suitable for working with action shots and available light situations.

OK, so I pinched the description from Kentmere’s website but I figure that if any prospective customer reads this they would want accuracy!

All of the images here were shot on Kentmere 400, 35mm film and the negatives scanned using an Epson V550 flatbed scanner and finished in Photoshop.  When I say finished I mean mainly spotting out dust marks, cropping in some cases and some minor dodging and burning. All things I’d do in my darkroom if it wasn’t currently being used as a store room!

I have used a variety of cameras whilst testing this film including a Nikon AF which has a fixed 35mm lens and very little in the way of manual capability. The challenge here therefore was to concentrate on composition and trying to avoid excessive contrasts in the scene.

The Nikon F80 was introduced in February 2000 and was considered by many to be the best 35mm film camera for serious amateur photographers until those amateurs went digital. It’s a relatively new addition to my kit bag and as ever with these old cameras I enjoyed putting it through its paces.

Yes, a wander back in time today and four images from the archive. All shot in London whilst I was down there working. As I was working all day these are of necessity night-time shots which at the time was a relatively new experience for me.

Sometimes there does not have to be a reason for posting an image other than you like it!  My thought for today is this: “Remember to make photographs for yourself – it doesn’t matter a jot if you are the only one that likes them, they are still just as special to you”.

A small selection of images from my first trip out with the camera in four months.

OK, firstly, I have to say that I’m not a fan of the sobriquet “‘tog” to describe a photographer but you have to admit it does scan better than “photographing”. Behind this rather cheesy headline lies a serious thought though; I’ve lost the urge to get out at every opportunity with my camera. In fact since I returned from Skye in early November 2016 I’ve only taken half a dozen images and these only two days ago.

My photographic mojo has been well and truly missing for the best part of four months and it is only now, as I make the first tentative foray back into things that I can admit to myself the scale of this loss of photographic impetus. You see it wasn’t just the cameras themselves that I put down. I stopped reading about photography; I forsook my habitual hour on YouTube every evening. I still have many hundreds of untouched RAW image files on my hard drive from the week in Skye. Mister Adobe was taking my money every month and the computer was keeping the software up to date but I wasn’t at the party.

I’m sure that I’m not unique however. Enthusiast magazines will occasionally run an article on the topic and will even offer the “Ten Best Ways to Regain your Mojo” or similar. It has to be a generalisation of course as all of us are different and we respond to different stimuli. The only reason that I haven’t panicked at this situation however is because it has happened to me several times over the years and my mojo has always come back.

In the past my wallet has often come to the rescue. With a new toy to play with I was only too keen to get out and about and thus my photographic mojo was miraculously restored. My wife wondered if the lack of the creative urge was less about loss of mojo and more about justifying that new purchase. I couldn’t possibly comment. What I can say however is the loss of the creative urge is real, happens to most of us at some point of time and most importantly can be overcome.

This year however there would be no magic bullet from my ancient wallet as I have given up spending on equipment for 2017. It makes giving up chocolate at Lent look like a walk in the park let me tell you.  What possessed me to announce this photographic moratorium at Christmas when we were discussing resolutions for 2017 I do not know. Perhaps it was partly because I had no interest in photography at the time. But I said it and try to be a man of my word. I’ve managed it so far (only another ten months to go).

There is little point me rehashing the “Ten Best Ways …” so I will cut to the chase and describe what led to those first tentative pictures last weekend. I decided to move all my kit from one room to another. Banal? Perhaps, but in doing so I rediscovered the pleasure of simply handling the cameras which in turn led to me slipping the Fuji X100T back into its habitual place in my coat pocket, a place from which it had been noticeably missing for around four months. I didn’t take any photographs but at least the possibility now existed.

Thus it was that three days later, on a Sunday, when I wandered down to the local supermarket, the Fuji was still sat, untouched, in my jacket pocket. Presenting myself at the supermarket at 9:28am I was annoyed to find it closed – Sunday trading laws! What to do? In the end my feet propelled me down to the River Calder and on to the newly rebuilt Elland Bridge. It was then that it happened, my hand unconsciously but tentatively dipped into my pocket and drew out the Fuji. A few moments longer and I had broken my duck – with a rather banal picture of a bare tree reflected in a meager puddle. Over the next half an hour I took a few more and found I was actively seeking compositions and not placidly reacting to my surroundings. It was 10:20 when I got back to the supermarket but I was happy. My mojo, whilst not restored, was returning!

I even took the “arty” picture at the top of the page from my home-office window when I got home after first checking the bus timetable (prior planning and execution!).

So there you have it. The next time that your photographic mojo disappears don’t reach for the credit card or any other of the “Top Ten” solutions but simply don your apron and start moving the furniture about and transporting your gear from one room to another! 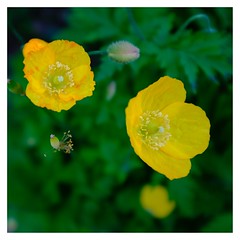