Ilford Ortho is an ISO 80 orthochromatic black & white film with fine grain and sharpness and “perfect for stunning landscapes” according to the Ilford website. When they brought it out in 120 last year I bought a few rolls but for various reasons I hadn’t used them until very recently when the arrival of a 35mm roll of Rollei Ortho 25 Plus prompted me to have a play.

Over the course of three days I used a roll of the 120 in my Zero Image pinhole camera and another roll in the Bronica SQ-A and finally the Rollei Ortho was put to use in my Horizon S3 35mm swing-lens panoramic camera.

The first roll, through the pinhole, was not destined to be a big success due to a schoolboy error. Remember me saying that orthochromatic film has no red sensitivity? So, why did I pop an orange filter inside my pinhole camera? I was pretty disappointed with the negatives until the light bulb moment happened and I realised that whilst the conditions that day were good for an orange filter – the film wasn’t!

The following day, like a grown-up, I opened a second roll and this time put it in a Bronica SQ-A and headed for a small patch of woodland with a tripod and a set of filters.

Given what we know about the sensitivity of orthochromatic film the results are not surprising. The red version has more detail incidentally only because I over-exposed it by one stop compared to the orange filtered version. The key characteristics of blue skies turning almost white and reds becoming very dark are clearly apparent as is the emulsions ability to give more nuanced colour separation in the greens.

I had read that a yellow filter was a useful tool with orthochromatic film and whilst there are differences between the no filter and yellow filter test shots they are subtle to my eye.

What I did find very useful in this woodland setting was a green filter however and I was lucky that it was a relatively still morning as the combination of a slow film and a small aperture meant exposures up to 8 seconds with the filter in place.

So, I clearly enjoyed the Ilford Ortho 80 in 120, but what of the Rollei Ortho 25? I put this roll of 35mm film through my go-to 35mm camera – the Horizon S3 Pro. This was the first time I had used the S3 on a tripod but with the aperture kept to f16 for maximin sharpness and depth of field the resulting exposure times of between 1/4 and 1/2 of a second left me little choice. Well, look no further than the next image in this post, one of the most pleasing compositions from my S3 to date and look at those tones.

Using filters on the S3 is a fiddly process and so I generally leave them at home and such was the case on this day. The negative has a very white sky but a little bit of burning-in has revealed some detail. These images are all digital scans by the way, I have yet to try darkroom printing any of these negatives. Even from the scans however the tonal separation in the foliage is very evident and my sense from looking at the negatives is that when I do get the time they will print very nicely.

All of the films were developed in Ilford ID11 (1+1) at 20°C with the Ilford film given 10 1/2 minutes and the Rollei 8 minutes. Whilst I may experiment in the future I see no reason to change this for my next roll of either film.

Whilst the Rollei was a single roll of 35mm film that I had been sent I do have a few more 120 rolls of the Ilford Ortho 80 in the fridge and I shall be looking for an opportunity to play with them further in the future. Clearly green or yellow filters will be a useful addition to my bag on the day depending upon the intended subject and I have a mental note to have them at the ready. 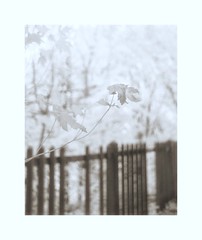