In the past I’ve always developed my 35mm black and white films using Ilford’s Ilfosol film developer, diluted at recommended ratios and developed for the recommended number of minutes. Such a little conformist! So, for my first film development in three years I decided to break with my own tradition and try stand development.   No reason other than I wanted to try it out for myself having read a lot about it recently.

I was developing two rolls of Kodak 400TX which insofar as I can determine both expired in 2015. I’ve read mixed reports on Tri-X stand developed in Rodinal but decided to give it a whirl for myself. Nothing like mixing up all the variables!

My chosen workflow is an adaptation that has been based on the many recipes  and slightly different approaches that I’ve been reading about.

Seriously … this was tedious …

Seriously, compared to normal film development, this was tedious although to be fair, now I know what to expect I’d use the two thirty minute “breaks” to have lunch or catch up on my forum reading.

The two strips of negatives are currently drying but my first look at them was very positive. I have 72 decent-looking negatives and whilst I’ve not looked at them closely my first impressions are fairly good. They have a full range of tones, look clean and sharp and blemish free. They do appear to lack a little contrast although that is the price of getting a full range of tones I guess. Grain looks a little harsher than I expected from this film in the past but it must be remembered that they are out of date films, with one film having sat in the camera, part-exposed, for around four years and the negatives are definitely usable. And as I intimated earlier, not everyone recommends stand development of Kodak 400XT.

Will I use the process again? Yes – absolutely, although I’d like to try it with one of my better lenses, fresh film and also an emulsion that doesn’t get such mixed reviews for stand development. But first I’m looking forward to printing some of these in the cellar darkroom.

Next week (Week 4 of FF) sees the first upload of recent film work. As a sneak peek this image was shot on 6th September using one of the toy cameras in my collection.

Taken with a Holga Panoramic 120 film camera loaded with out of date (6/10) Ilford HP5. Taken on 6th September for my 365 but not uploaded to my Flickr account until the 19th as I needed to get the film developed and then needed to scan the negative.

That exposure is important is a self-evident truth that doesn’t need expanding upon here. Imagine my disappointment then when two precious rolls of Velvia 50 came back from the lab with muddy shadows, muted colours and on one roll evidence of winding on problems with the film holder.

That was 2015 – and so disappointed was I that I threw the two sleeves in a drawer to lay undiscovered … until today.

The offending film back is history needless to say. After first checking that it could not economically be repaired I placed it on a shelf until many months later when I felt ruthless enough to get rid of it. I did however decide to scan a few of the images today and reflect upon the disappointment publicly for the first time – luckily I only have one reader!

The picture of Sligachan Bridge at the top of the page was one out of a tiny number of images from 24 negatives that did not disappoint and I clearly got the exposure just right by luck or judgement. To be fair it was a tough day for metering such an uncompromising material as slide film as it was generally dismal, grey and prone to raining. The very occasional ray of light filtered briefly through but on the whole it was naff – I vividly remember struggling to adjust the camera settings with one hand whilst holding an umbrella with the other.

To try to deal with the differences in tonal range between sky and foreground I decided to use my Lee filters. I also chose to fit the holder with the attached polariser figuring this would help me control the glare from the water. I made so many mistakes you’d think I was a complete rookie. The reflection of the filter holder can be seen in the image above around the edge and a bright circular area in the middle shows it is the filter holder and polarising filter we are seeing. Honestly, if it wasn’t for the fact that I’m wanting to record my learning this image wouldn’t see the inside of my hard drive let alone public gaze.

But, it was not all doom and gloom, especially as I am able to sit here today and reflect upon the myriad small things that went wrong, the Sod’s Law of a defective film back and of course a couple of pleasing images. In hindsight it was a crap day weather-wise and I should’ve stuck to the Nikon DSLR in my other bag!

The image below was a direct result of the faulty film back. It was a newly purchased second back and I was using it for the first time. I had one roll of the 120 Velvia 50 in this back and the other in the original film back I’d been using ever since I’d purchased the Hasselblad. Whereas most of the other frames on that roll have a small degree of overlap this is a complete double-exposure. But its not all bad news as it was in fact this frame that alerted me to the exposure errors I’d been making all morning as, unlike the other frames which are generally too dark, this had a reasonable exposure level despite being exposed twice. I’d forgotten the old film adage “expose for the shadows and develop for the highlights” it seems.

I couldn’t do much about the faulty film back, that was pure bad luck and I stopped using it the minute I realised it was slipping. Sadly, as I only have 120 roll film developed when I have half a dozen or so exposed rolls, I’d put three or four more rolls through the back before I found out it was defective.

So, there we have it. My dirty washing publicly aired as it were. I hope the lessons I learnt will be useful for others:

Well, here it is, my First Film Friday, a triple alliterative to boot!

An archive image as already explained but freshly scanned this morning using an Epson Perfection V550.

To mark my resurgent interest in instant photography I have set myself an additional daily challenge for August. In addition to the ongoing 365 Challenge I am also making at least one instant photo a day using the instant cameras that I’ve been acquiring from a well-known online auction site. But, it seems that not every day is suitable for instant photography, at least not when you’re still only a tiny way along the learning curve; my SX-70 Sonar for example uses 100 ISO film and needs lots of light or a tripod.

The Lomo’ Instant uses Instax Mini film which is rated at 800 ISO so I thought I would use it for my daily image on 16th. Now, I am already liking the aesthetic from the Lomo Instant – I am amazed at how differently it renders images than say the Instax when they are using the same film stock. One thing however that is becoming very clear is that setting the correct exposure first time is going to come from experience. My Fuji Instax cameras generally do very well in Automatic mode and do it consistently but results from the first pack of film in the Lomo Instant are certainly not consistent and I am already sensing a tendency to underexpose.

For my first shot I left the camera on the Automatic everything setting and the result was very under exposed so I then shot another at Automatic but with +2EV of compensation set with much better results. For good measure I also shot a third image at +1EV for comparison. The results are shown above. In the end I used the version from the Instax Wide 210 shown at the top of the page for my Daily Instant but I have to say that the Lomo has the potential for much more atmospheric images once I’ve mastered it’s foibles.

To be fair this was not an easy scene on a dull day when it was actually raining but it’s an exercise I can repeat on a brighter day to see what happens in different conditions. I will also put the camera on a tripod and play with an external light meter to see how well the camera settings relate to light meter readings. 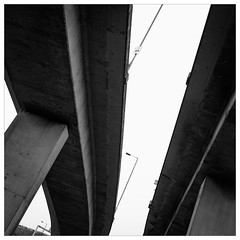 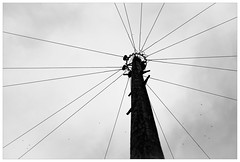 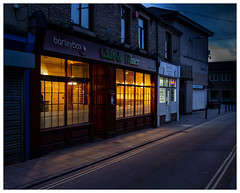