I’ve been experimenting with the Fuji X-T1 which was recently converted for full spectrum photography using three IR filters.  The Fotga variable IR filter is adjustable from 530nm through to 750nm.  The first image  here was shot with the filter set to 750nm.  The resulting RAW file is blue as can be seen on the left hand side of the first image below. In the past, when I was using an 720nm infrared converted camera,  I have channel-swapped the reddy/brown RAW files which created a blueish file and I wondered whether it was necessary to do so with these. The right hand side of the first image below shows the effect of channel-swapping.

But what of an image shot at 530nm?  In the image below the RAW file is again on the left and note how different the  tones are as more visible light is allowed to hit the sensor.

Now, whilst there is a definite difference in the tonal values of the image shot at 530nm once again there is no appreciable difference between the mono conversions directly from the RAW file compared to the channel-swapped version.

Now it has to be acknowledged that I didn’t chose the “best” conditions for this type of test, most people reckon on a bright sunny day for the best from infrared photography, but this non-scientific test nevertheless suggests that channel-swapping may not always be necessary for mono conversions.

The next comparison is from an image shot with a 950nm filter. I have carried out exactly the same process but this time the split runs diagonally from top right to bottom left.

Around Elland Lock on the Calder & Hebble

Around Elland Lock on the Calder & Hebble

Again, there is virtually no difference, the conversion from RAW being arguably a tiny bit darker but we are talking about fractions here. Incidentally, this was shot in bright but cloudy conditions.

The final image below has been treated exactly the same (the split running top to bottom middle) as the other two above. This was taken on a bright sunny day with the Fotga variable infrared filter at 530nm.

Again, there is virtually no difference. There is a slight tonal variation, particularly in the water, circled, but even that is not a major variation.

The upshot of this experiment is that I’m not certain I need to channel-swap for monochrome conversions going forward. I will probably continue to do so for a while until I’m confident of the process though. False-colour infrared is a totally different kettle of fish though and one which doesn’t interest me quite so much although I’m sure I will be having a play at some point.

Another grey, drizzly day but I still wanted some exercise so headed down to the canal with a couple of Fuji cameras in the bag.

The following images were all taken with the full-spectrum Fuji X-T1 using the Fotga variable infrared filter at either 530nm or 720nm.

I took a punt on a variable IR filter from Fotga this week to use with the newly converted X-T1 (no, never heard of them either). For £16 though I thought I’d chance it.

Today it is grey, there is 100% cloud cover (also grey) and it is raining gently but persistently so not ideal conditions to test an IR filter but I went anyway. The test shot above with the Fuji X100t (standard JPEG SOOC) shows how un-ideal the light was!

Anyway, I figured that as I was there I’d complete the test anyway even though I knew I’d have to re-test once better conditions were available – which won’t be for a while according to the Met Office!

The filter is rather chunky, not a bad thing with my aged fingers, but screws in very easily and appears to be well made. The outer glass rotates smoothly and there are markings around one quarter of the rim to show the relative strength of the filter. It is marked as being 530nm to 750nm and whilst I have no way of checking this the results from the filter do show a definite graduation from one extreme to the other as can be seen in the contact sheets below.

One thing to notice is that whilst mine has a 77mm filter thread the front thread is somewhat bigger which meant my 77mm lens cap was useless. I use stepping rings so always buy screw-in filters at 77mm so I can then use one filter on all my lenses.

I shot a sequence of ten images, all hand held from the same spot, moving the filter one full “stop” between each frame.  I created the following contact sheets using the JPEGs (standard preset) straight from the Fuji X-T1 which as I mentioned yesterday has been converted for full spectrum photography.

I then applied a basic channel swap (swapped Red and Blue channels) to the contact sheet which means that every image has had the same treatment.

I’m particularly looking forward to trying the “530nm” end of the filter on a sunny day as this will produce the strongest false-colour effects and up until now my only option has been a 720nm filter which is mainly used for black & white work although does occasionally render a nice false-colour image too.  I have no way of telling if these ratings are accurate of course but at least there is a clear difference between the two extremes and a clearly noticeable transition as the filter is rotated from one 530 through to 750nm.

Finally, another image shot with the Fuji X-T1 with the FOTGA filter on the lens set at 530. This is a false-colour infrared image and the channel swapping was rather more involved this time than my usual basic Blue/Red swap.

The image was converted from the RAW file, channel swapped (Red: R30/B70 Green: G110/B-10 Blue: R85/B15) and then Curves and Levels adjustments. When I get time I will post an overview of how I process these files and what my approach to channel swapping looks like.

I’m looking forward to a bright sunny day, although it seems like I have quite a wait ahead of me!

The Fuji X-T1 is home from his conversion for full spectrum photography and I took it out for half an hour this morning to quickly check it out.

The two images on the top row are RAW files basically straight from camera; they were cropped and the exposure tweaked very slightly in Adobe Camera Raw to bring the histograms as close to the same as possible. The top left is the result with no filter attached and to my eyes the stonework has a slight greenish tinge whereas the ivy on the tree, which should be a dark, glossy green is paler as is the foliage in the hedge. Looking closely there is plenty of detail in the image though. The in-camera black & white jpeg was very “natural” looking however and I could use the camera for “straight” black and white photography if needed; the result wouldn’t match those from an unconverted camera but would be very usable.

Top right is the straight from camera RAW file with the 850nm filter fitted. This filter is mainly intended for black & white work (see bottom right) and I intend to purchase other filters as and when for comparison purposes.  My main reason for converting the camera was for black and white infrared photography and I’m more than happy with the result using this filter. My, very brief, experience this morning suggests I lose a stop with the 850nm filter in place which is more than manageable I think.

The channel-swapped mono from the RAW file (bottom left) is virtually indistinguishable from the in-camera black and white although the foliage is a little brighter in the latter. This could of course be down to the RAW conversion as much as anything.  I always shoot RAW+JPEG however so will have the luxury of knowing that I have all my options open. I’ve always been happy to use Fuji in-camera JPEGs and this hasn’t changed despite the camera having been converted.

So, a succesful maiden run this morning and I’m looking to putting the X-T1 through its paces over the coming weeks.  Watch this space for updates but in the meantime I’m off to check out what other filters are available! 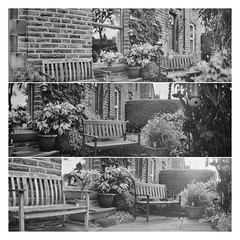 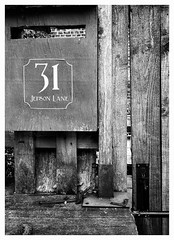 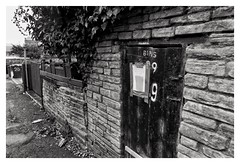