It’s been a couple of weeks since my last post so I thought I ought to do something to reassure my reader that I’m still here! With a compromised immune system I’m being a little careful about social interaction but have been very busy indoors including a full day in my makeshift darkroom recently.

Looking at my notes I see I’ve shot over thirty rolls of film this year already, a mix of 35mm and 120 medium format. Twenty six of those I developed before cracking my tank last week so I have five awaiting the delivery of a replacement tank. I’ve opted for a larger tank this time so I can develop two 120 rolls, or three 35mm, at the same time.

A few of those rolls have been created by a newly acquired Bronica ETRS and a trio of lenses (40mm, 75mm and 250mm). I’ve shot medium format many times over the years. I’ve previously shot with a Pentax 645 (the only camera I’ve ever regretted selling), I also have a Hasselblad 500CM, Mamiya C3 TLR and a Mamiya RB67 in my bag all of which I’ve used recently. So I’m no stranger to medium format. But, the Bronica has stolen my heart at the moment. At 6×4.5 it’s the smallest of my medium format cameras but it’s SLR-like handling is a joy. I also have the option to swap in a waist level viewfinder for that traditional MF experience too.

There will be more to come over the months I’m sure but for now stay safe and take care!

I’m not planning on a POTD every day, that’s what my 365/366 on Flickr is for. However, as I managed a second morning out with the Ricoh 35ZF today I thought “why not?” and so here it is …

This was a quick handheld shot I grabbed as we left the cafe where we had breakfast this morning. It won’t win prizes for technical excellence but I like the atmosphere it creates.

An interesting challenge came my way a week or so ago. A good friend of mine found a roll of JESSOPS colour negative film in his garage and brought it over for me to play with. How long it had been there he knew not, but a note inside the film canister suggested it had been in there for over twenty five years.

After giving the matter some thought and consulting with a couple of other film workers I decided to process the film in black and white chemicals. The logic being that even if the latent colour images had survived the years in the garage it was likely that the colours would have shifted somewhat; the consensus being that if there were images they would have a noticeable colour cast and I may we’ll end up converting these to black and white anyway.

The next decision was what developer. Colour negative film is generally developed for three or three and a quarter minutes in C41 chemistry but that information was of little use to me. I eventually opted for what is called stand development which involves immersing the film in highly diluted developer for an extended period leaving the tank to stand untouched for the duration. My developer of choice for stand development is Rodinal so the decision was made. Timings are less critical with Stand development as the very diluted developer is basically allowed to exhaust itself. It has a compensating effect in that the developer exhausts itself in areas which require greater development while remaining active in less-exposed areas, which has the effect of boosting shadow detail while preserving bright highlights.

Pre-wash in deionised water for 5 minutes

So much for the theory. What about the reality? My plan, which I followed carefully, was based on my usual stand workflow with some tweaks to accommodate the unusual circumstances. I rarely use pre-wash but thought it might be helpful here to lubricate the film as it were. I usually use a Stop bath but plumped for water on the basis of keeping the chemicals used to the minimum. Finally, I fixed for 60% longer than usual.

To view the negatives are a bit on the dense side but there are definitely images!

Undeterred by the very dark negatives I turned on the scanner and set to work. It was not a fully exposed roll of 36 images and it had clearly been removed from the camera when only part-used. Most of the twenty-odd frames were out of focus shots of rally cars in a wooded area. A couple were taken indoors at a car show and one of these was pretty sharp so it was this one that I chose to scan fully.

So, there are images and my friend and I are delighted with how the negatives look. There remains one puzzle though. He does not recognise them and is adamant that he would never take a part exposed roll out of the camera!

In the past I’ve always developed my 35mm black and white films using Ilford’s Ilfosol film developer, diluted at recommended ratios and developed for the recommended number of minutes. Such a little conformist! So, for my first film development in three years I decided to break with my own tradition and try stand development.   No reason other than I wanted to try it out for myself having read a lot about it recently.

I was developing two rolls of Kodak 400TX which insofar as I can determine both expired in 2015. I’ve read mixed reports on Tri-X stand developed in Rodinal but decided to give it a whirl for myself. Nothing like mixing up all the variables!

My chosen workflow is an adaptation that has been based on the many recipes  and slightly different approaches that I’ve been reading about.

Seriously … this was tedious …

Seriously, compared to normal film development, this was tedious although to be fair, now I know what to expect I’d use the two thirty minute “breaks” to have lunch or catch up on my forum reading.

The two strips of negatives are currently drying but my first look at them was very positive. I have 72 decent-looking negatives and whilst I’ve not looked at them closely my first impressions are fairly good. They have a full range of tones, look clean and sharp and blemish free. They do appear to lack a little contrast although that is the price of getting a full range of tones I guess. Grain looks a little harsher than I expected from this film in the past but it must be remembered that they are out of date films, with one film having sat in the camera, part-exposed, for around four years and the negatives are definitely usable. And as I intimated earlier, not everyone recommends stand development of Kodak 400XT.

Will I use the process again? Yes – absolutely, although I’d like to try it with one of my better lenses, fresh film and also an emulsion that doesn’t get such mixed reviews for stand development. But first I’m looking forward to printing some of these in the cellar darkroom. 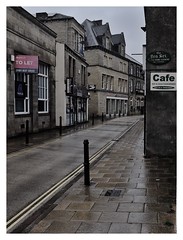 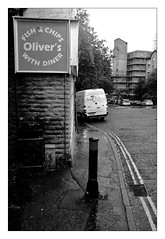 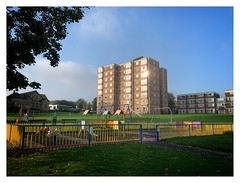