What do you do when you’re totally distracted by domestic things over which you’ve no control?  When you have no option but to sit and wait and see what happens? If you’re like me you pick up the nearest camera and pop out for a walk. Which is what I did at the end of last week whilst number two daughter was in hospital for the birth of her second child.

My “rule” for impromptu wanders is to grab the nearest camera and on that day it was the Fuji X-Pro1 with a 35mm lens. However, sitting on the table next to it was a GoPro Fusion 360 degree camera that I was charging in order to make sure it was still working before my (fingers crossed) short break at the end of this month.  I don’t use it very often but it’s a fun camera that I like to take with me when I go away. I slipped it in my bag too.

I promised the wife I’d be back within the hour and drove down to the local canal, parking a ten minute walk from a small patch of woodland that I often wander through with a camera. Approaching through the trees the first thing I noticed was the bluebells.  Not as many as in previous years but a pleasant surprise; what with the pandemic and everything I’d forgotten it was bluebell time.

I took a few images with the X-Pro1 but wasn’t really “feeling” it, I was probably too distracted by other things.  So, I pulled the GoPro from the bag and carefully placed it amongst the bluebells being careful not to trample any of the delicate flowers. The camera is controlled via a smartphone and seeing the live feed quickly absorbed me as it always does.  This isn’t a first choice camera but when I do use it I never fail to get fully immersed in what I’m doing.

Half a dozen compositions with the GoPro and it was time for me to start walking back to the car if I was to keep my promise to be back within the hour.  I couldn’t resist a couple more though and placed the camera in the branches of a tree and did something I very rarely do … a selfie!

I’ve used several 360 cameras over the last couple of years and without exception have found the post-processing part every bit as much fun as taking the images in the first place.  Which is very unlike me.  This can be done on the computer and in my view this gives the highest quality files BUT playing with the images on my phone or tablet seems to me to be very much in keeping with the ethos of the camera and how its used.

So there you have it. Photography doesn’t always have to be a “serious” pursuit, and in fact having a bit of fun with it can help distract you from other matters when needed.

Oh, nearly forget, we have our first granddaughter – mother and baby both doing well.

My side project blog, Oldie360, has been closed as I start to simplify my online presence. As an enthusiast photographer I really didn’t need the additional complexities of managing more than one “brand” on social media. I am keeping the Oldie360 Instagram feed in order to separate the 360 images from my usual stuff but any blog posts will in future appear here.

I have salvaged a couple of blog posts from the Olde360 site and posted them here after suitable tweaking but whilst the username lives on the blog is no more!

“Can anyone throw light on the best 360 camera … high resolution and clarity … easy on editing?”

When I came across it there were 47 comments (hence my title) but it was increasing even as I read some of the replies. My favourite was:

“This question gets asked once a month. Just start reading backwards.”

Which kind-of highlights the problem with new(ish) technology. In its early days it is progressing at such a phenomenal rate that each new device is virtually obsolete before it comes to market. It becomes virtually impossible to keep up to date with the new information and specs let alone actually having the most up to date technology in your bag. In the very few weeks that I’ve owned my INSTA360 One the price has dropped by almost 20% and a newer model has been released.

So, what to do? Jump straight on the upgrade treadmill or stick with what I have despite knowing that it is no longer the best I could afford?

Well, that’s a simple one in reality. There is absolutely no point in upgrading for at least two generations in my view as the technology is changing so rapidly it does not make sense to constantly upgrade. It’s different in a mature market but generally available 360 photography is still a nascent technology with all the volatility that brings.

It’s not just technology that’s evolving though. My understanding of the camera’s capabilities is also improving each time I use it. The more I play the more I can see opportunities for exploiting the technology. Hence sticking the camera up amongst the branches of a small tree in a car park! Also, the more I look at other peoples work the more I realise that there is lots yet to learn. 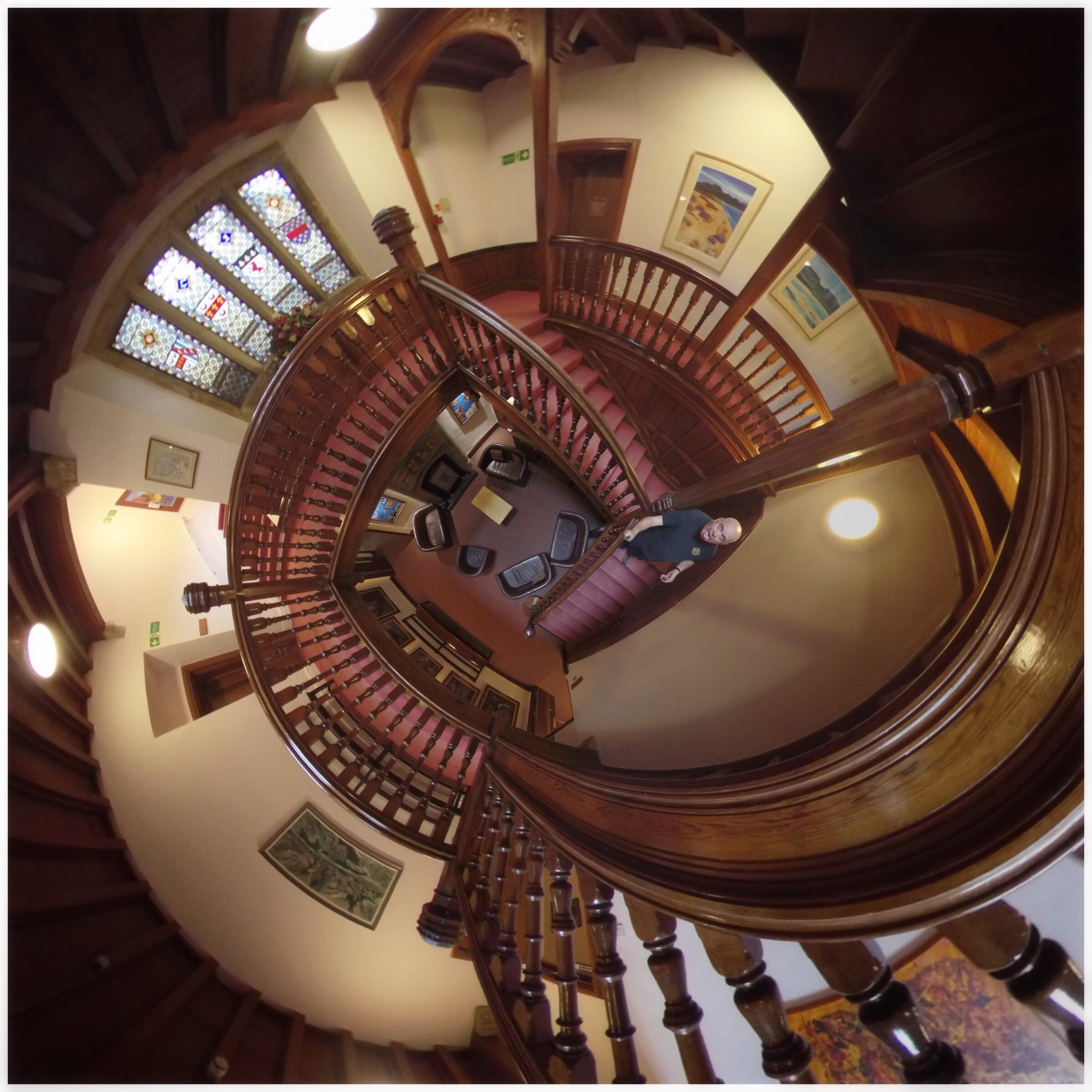 Originally written on 6th October 2018 when I was indeed a 9-day veteran of this little camera. For the record I’m still using it regularly six months on.

Being a veteran of 360 camera ownership (OK, it’s been nine days) I thought I’d share my initial thoughts starting with the purchasing decision itself. As this blog is something for me to look back upon when my fast-ageing body gives up the ghost so if it feels a little self indulgent then you know why. 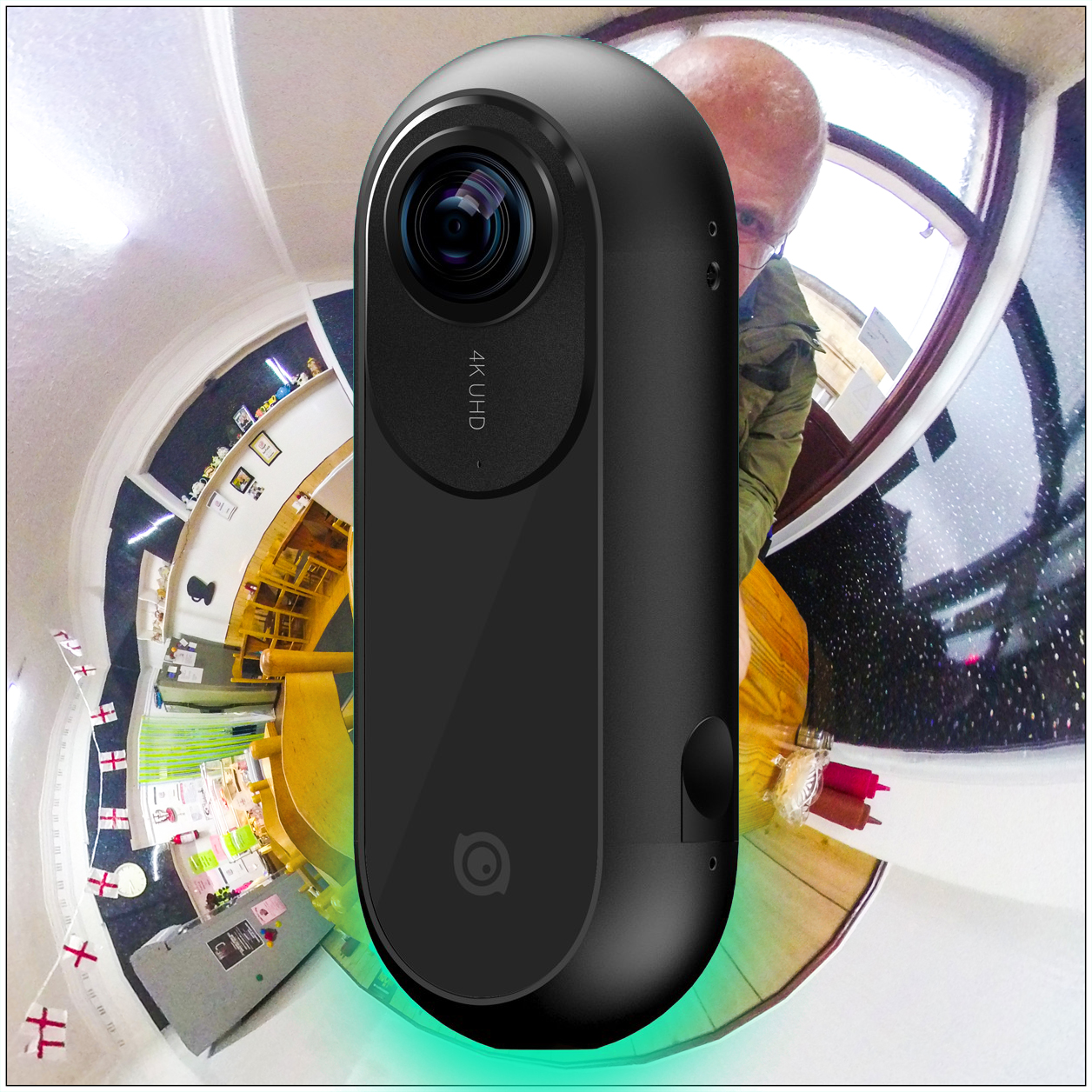 So, my weapon of choice for this latest venture was the INSTA360 One. It wasn’t cheap (£275 at the time I purchased it) but then again it wasn’t the most expensive on the consumer market. There’s a lot of choice, ranging in cost terms from £50 to £600 at the time of writing but it has to be said the quality does vary considerably as I discovered from reading and watching the numerous online reviews.

I chose the INSTA360 because it seemed to offer a decent all round package for a beginner with some ability for manual setting if required. I watched/read a lot but my takeaway from all that research can be distilled into a few words – good but not spectacular in all areas and easy to operate for the raw beginner with a little scope for manual operation as their skills develop. There, that little gem has saved you hours of research!

To be honest, I was a little concerned at the “good” label for image quality, video quality, stabilisation and all round usability. In my regular stills work I use a high end Nikon DSLR and also the Fuji X-T3 which I think is going to become one of the all-time best crop sensor cameras. So while settle for good when other 360 cameras were offering far better performance? The answer is probably two-fold.

It’s too early for me to write with any modicum of authority on handling or image quality. I’m still learning in terms of the physical operation of the camera and these considerations will of course impact on ultimate image quality. 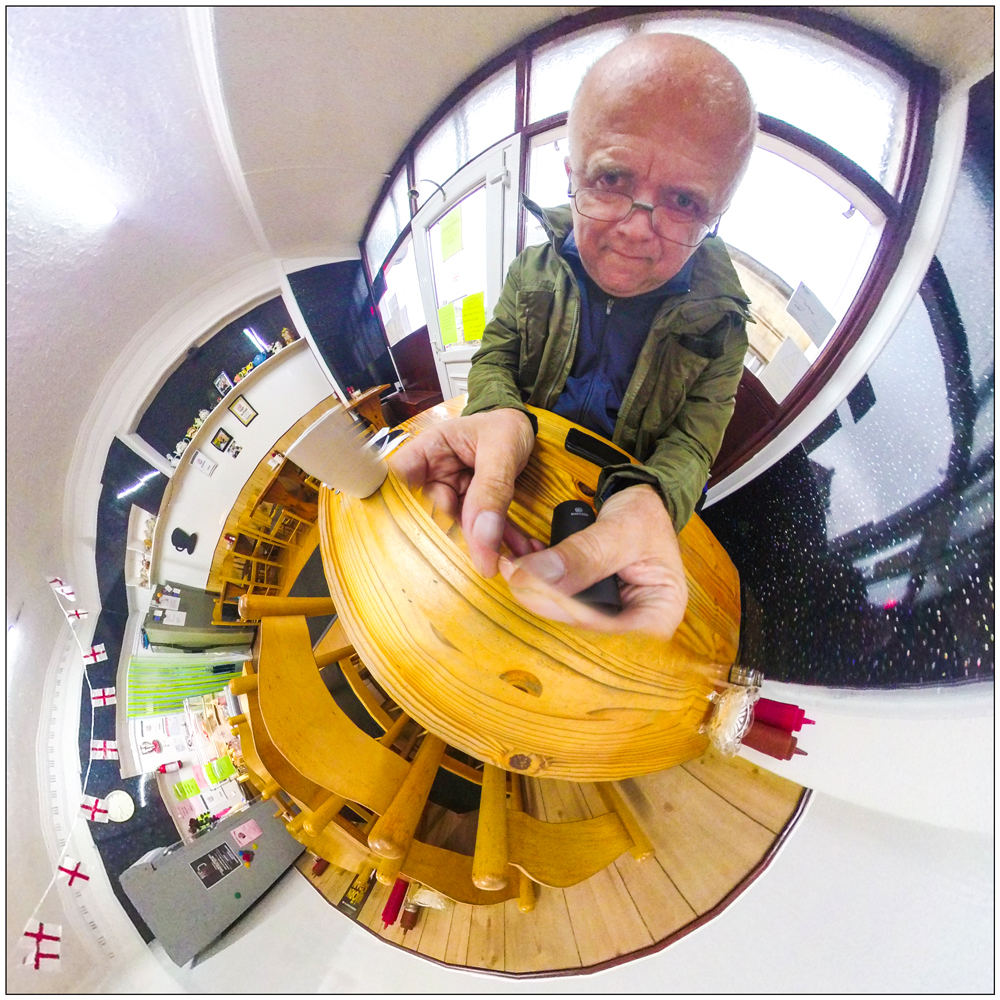 What I can say though is that it was a breeze to set-up and I was able to start taking photos immediately. There was even an SD card inserted and a decent battery charge when I took it out of the box. I have shot with the camera held in my hand, on a selfie stick, sat in its little stand on the car roof and also with it attached to my iPhone. All work and I particularly liked having the screen to view “live” when attaching it to my phone. I also used the phone to trigger the camera via bluetooth but this proved problematic for a fumble fingers like me with the iPhone behind my back. Plus the range seems very limited and it seems to need a clear view of sight making hiding the phone a challenge especially as you are shooting blind!

So, for what they are worth these are my initial thoughts.

I hit 60 last year (I know, you all thought I was about 12) and wanting to buy me something a little different my wife plumped for the INSTA360 One camera. The clue is in the name – it shoots 360 video and stills. Now, we are not taking DSLR image quality here and at a point when I’ve just upgraded the little Fuji X-T20 for the X-T3 it seems counterintuitive to be buying a camera with some serious limitations in respect of image quality. But, and this is important, the purpose of buying such a camera, for me, was not to produce 20×16 inch exhibition prints, but to have a bit of fun. At present the biggest audience for 360 images is to be found on social media.  The tiny 24mb/4K sensor in the One is more than adequate for the purpose and indeed obsessing about image quality is to miss the point of owning this camera.

The small, very simple to operate, 360 camera gives me access to another outlet for my photographic exploits. Up until now I’ve not been using it “seriously” as I’m enjoying the fun of creating little selfie-worlds but whilst playing I’m learning. I’ve already realised that using my phone as a Bluetooth trigger is a little limiting so have ordered the small, but relatively pricey as it has to be bought from abroad, INSTA360 remote trigger. This can be used discretely in the hand or if using the selfie stick it can be attached to the stick itself.

I shall write more about this new photographic offshoot over time as I get to grips with its idiosyncrasies but in the meantime you can also find me  on Instagram.

Me. Selfies. Who’d have thought it!