When I was studying a few years back a couple of concepts really caught my imagination. One was psychogeography which I wrote about HERE. The other was the “edgelands” which is the subject of todays post. The two are for me interconnected as my own exploration of the edgelands concept in the past, and indeed more recently, has been conducted in the manner of the flaneur we discussed briefly in that earlier post.

For the purposes of my studies back then, the discussion about these edgelands was linked primarily to the book EDGELANDS: Journeys into England’s True Wilderness by Paul Farley and Michael Symmons Roberts published in 2011. I have just reread the book prior to writing this post and found it as engaging as the first time I read it over five years ago.

So, to a definition. Farley and Roberts acknowledge that the term “edgelands” is not theirs. It seems that geographer Marion Shoard got there first. She wrote about England’s edgelands and gave them their name. The edgelands too are perhaps not really meant to be seen, no one creates edgelands to attract people to the space. As Farley and Roberts note they are more likely to be seen as a blur from a car window than experienced for their own sake.

For me, when we talk about the edgelands, we are thinking about those places where one urban space meets another or where town meets country. Typically they are untidy, neglected areas where neither town nor country have the ascendancy. And they shift too. Periodically, new development will sweep away the neglected periphery replacing it with something shiny and new. Yet there will always be edges, they don’t get rubbed out but are simply relocated.

If you know those places where overspill housing estates break into scrubland, wasteland; if you know these underdeveloped, unwatched territories, you know that they have ‘edge’.

Take my home town of Elland. The edges of the town clearly show the effect of the decline in industry, particularly the textiles and allied trades, that has caused Elland to become run down over the decades since textiles ceased to be King in this part of the country. Surprisingly, behind some of these crumbling and dilapidated walls business does go on, albeit in far less skilled trades and far less grand surroundings. But there’s no escaping that the periphery of town is in many ways no-man’s land. Unloved and neglected but still very much there. From time to time a piece of land is repurposed, perhaps a few new houses, but that simply relocates the edge; there is never a neat transition twixt the town and country.

The edgelands then represent a complex landscape, a debatable zone to quote Farley & Roberts. As the economic and social situation changes so too can the fate of these edges. High demand for new housing and the opportunity for a good profit for example can make that derelict plot on the edge of town more attractive to house builders than when the original factory that had been slowly decaying was demolished years before, the land left to its own devices and slowly being reclaimed by nature.

Revisit an edgelands site you haven’t seen for six months, and likely as not there will be a Victorian factory knocked down, a business park newly built, a section of waste ground cleared and landscaped, a pre-war warehouse abandoned and open to the elements. Such are the constantly shifting sands of edgelands that any writing about these landscapes is a snapshot.

Photography too can only reveal a snapshot of the edges. A moment in time which few will remember and fewer still care for. As photographers it feels almost incumbent upon us to capture, to celebrate and to remember these fleeting edges.

But there’s the rub.

As photographers we tend to try to make our images as appealing as possible on the whole, especially those of us with a leaning towards the pictorial. Let’s face it unless the images are part of a documentary-style story who wants to see the crummy face of town? However, whilst I am at heart a pictorial photographer I have nevertheless always been drawn to the less-glamourous face of the towns and places I live and work in. I’ve even been known to seek out the grimier side of town when on holiday or visiting somewhere new. It seems I have a natural tendency to gravitate towards the edge.

As I perambulated around the edges of Elland a few weeks back I was musing on how run-down the town is and not for the first time started to wonder how I’d photograph it to attract visitors, say for a tourist information website. But, how much more interesting to document it as it really is. The plain, unvarnished truth rather than the glossy, beautified fiction of a tourist guide. In truth, I have lots of both types of these images already, particularly the less picturesque but these days I’m drawn to the edges even more. The pandemic is of course partly responsible for a change in behaviour as movement was restricted. I have probably walked more of the edgelands of Elland in the last eighteen months than in the previous eighteen years.

One thing that I’ve noticed more recently is that even the cobbled lanes running along the backs of terraced houses seem to constitute an edge. The periphery of a back yard where it abuts the unadopted lane, no one willing to “own” upkeep of either and so the edges creep like tendrils into the town. As an urban photographer there is a seemingly never ending supply of subjects for my lens. That I tend to photograph the edges using a more pictorial rather than documentary style is perhaps how I put my own stamp on edgelands images.

Are you drawn to the edges? Do you lend a pictorial eye to these less-loved spaces? I’d love to know your thoughts on the subject! 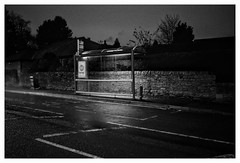 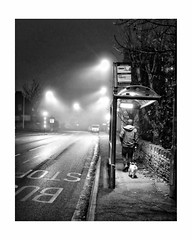