I’ve not yet written about the KMZ FT-2, the latest addition to my camera collection and a swing lens panoramic camera to boot. I will rectify that shortly (ie within the next few weeks) but suffice to say, this is an interesting camera to load not least because it needs to be done in the dark. It also means that swapping out a film is not really a straightforward task. So, having loaded HP5+ the night before expecting an overcast day there was no way that when I awoke to clear blue skies and sunshine that I was going to swap the film out for some FP4+. Choice of film speed is critical with this camera by the way as it has one aperture (f5-ish) and a fastest shutter speed of 1/400th of a second. That probably puts things into perspective.

What to do? Leave the camera behind? I was loath to do that as I’m still working out how to best overcome the camera’s physical handicap (more later – you tease!) and this was to be the first non-test roll. I would also be in somewhere other than Elland which doesn’t happen very often at the moment. Brighouse was to be the destination and whilst the wife was shopping I was to have a thirty minute pass to take some photographs.

Underneath the road bridge (see below) I took the first meter reading of the day. At ISO 400 I was getting 1/60th at f16. A breeze for the Horizon S3 but extrapolating for the circa f5 aperture of the KMZ FT-2 meant a shutter speed of around 1/1000th second. With a nominal top shutter speed of 1/400th of a second and allowing for the flexibility of the film emulsion this was still a good stop adrift. It was either, put the camera away, expose at 1/400th and trust the film could handle it or rate the film at 200 and pull in development. The first was a non-option. The second wasn’t ideal given I’m still feeling my way with this camera and so I went with the option to pull the film. Given the contrast in the scene it turned out to be the best choice too.

The image, above, of reflections underneath the bridge has really benefitted from the pulled process as it’s brought the contrast in the negative down nicely and made for an easy conversion in Snapseed. I rarely mention my choices for hybrid working but I really like to keep it very simple. I copy the negatives with a Fuji X-T3 and an old Nikon micro lens before opening the file in the Snapseed App on my tablet.

I mentioned last time that pulling HP5+ wasn’t something I’d do on a regular basis but I’m really glad that I had the technique up my sleeve as it were when I went out yesterday. Knowing your film stock and knowing how it reacts to different processing methods is a very useful thing. To acquire it you need to work with the film regularly and be prepared to experiment. Putting in the effort to do so may seem like a pain at the time but it rewards the patience in the long run.

One thought on “Pulled … again!” 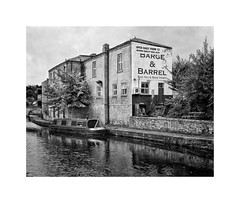