I’ve just posted daily image 159 for the 2018 365-Challenge, which is my 222nd consecutive daily image since I started the image-a-day in October 2017. It is a few months since I reflected upon the project – indeed, its become so much a part of my every day that in some ways I no longer give it quite as much thought as I used to; it is indeed becoming part of my daily routine.

Beyond wondering if I could stick at it, one of the things I was interested in from the start was whether I would fall back upon my Fuji X100t or iPhone as my main camera of choice.  I am fortunate enough to own several cameras and it seemed to me that taking a picture a day but still leaving the bulk of my kit unused was missing the point in some way.  Whilst at the start of the process I was having to consciously make the effort to move out of my comfort zone of X100t in pocket when I left the house I am now finding that on the whole I am using the full range of cameras with a couple of notable exceptions.

There was a particularly prolific period of around six weeks in March/April when, temporarily freed from the tyrannies of pneumonia, I went out every day and I took several thousand images. Looking back, if I excluded the drone shots, all but around thirty of these were shot with one of my Fuji cameras.  They are smaller, lighter and generally more convenient as I’ve commented before which was especially useful whilst still recovering.  Noticing this, I made a conscious effort for a few days to use other cameras and so when I decided to  go and visit the bluebells  I deliberately chose the Nikon D800E.  I have to confess I almost popped the Fuji bag into the car as well but was strong and went out with just the Nikon.  I’ve not noticed any particular leanings since then and indeed apart from that instance my two key cameras (Fuji X-T20 and Nikon D800E) have largely shared the daily honours and between them account for 60% of my daily images year to date. Unsurprisingly, the X100t is in third spot whilst the drone, which I have actually used more than any camera other than the  XT20, is in the number four position with 15 365 appearances.  This is largely because I don’t want to overwhelm the 365 with drone imagery and also partly because a lot of my drone images have being trying out ideas and testing filters etcetera so fodder for my blog rather than the 365.

What is very pleasing is that I have only relied on the iPhone for 3 images. I am also very pleased to report that I have not as yet needed to resort to taking a picture of my lunch or coffee to fulfil the daily picture requirement. Many days I will take an image early on as a form of insurance but only once have I got to the end of the day and had to fall back on this for my 365. I am striving to make a meaningful image every day; something of which  I am proud and happy to share rather than just a snap of something random for the sake of posting an image. Incidentally, around 85% of my daily images are also posted on the same day.

Had the Challenge been to simply post one image a day regardless of when it was taken I do believe the split of subjects would be different. Looking at my Flickr photo-stream I have in the past had a general bias towards landscape, particularly mono.  However, with the demands of the 365 this has changed and urban images now account for around a half of my recent postings and indeed 52% of my 365 images. That floral imagery is as prevalent as landscape (16% each in the 365)  is not something I would have anticipated even given I do enjoy floral photography.

The good news in all this though is that I am a lot happier with my current urban work than with previous work in this genre. I am using my eyes more and seeing compositions that I would have missed in the past; 365-2018-142 is I think a case in point.

True North (above):  I’ve explored this location numerous times in the past and there are quite a few 365 images from the Dean Clough area. I think this is the first time though that I have pre-visualised to the extent that I knew I would want the telephoto lens though. The Fuji Velvia preset provided the proverbial icing.  The colour/mono split has also taken me by surprise. 121 colour versus 38 mono images means that 76% of the 365 collection are in colour, something I did not see coming.

So, some interesting facts and figures (for my Inner Geek) but the most interesting thing I’ve noticed is how I no longer stress over the daily image. True, it’s one of the first things I think about when I get up in the morning but it’s in there amongst many other things that I need to get sorted that day. It’s definitely not a chore but it is something I need to tick of the to-do list each day in the same way I tick-off sweeping the hall or putting the washing on.

Finally, a couple of mosaics showing the April and May uploads. Clicking on each should take you to the corresponding album on Flickr! 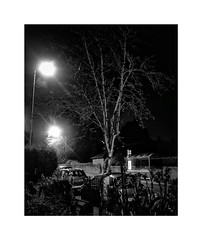 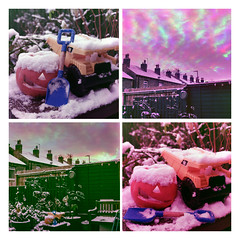 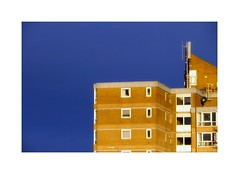