Last week I found a roll of 120 Ilford Delta 400 in the back of a drawer that had lain there for goodness only knows how long. Nothing on the label told me what camera it had been through (I have four that take 120 roll film) nor what was actually on the film. I’ve only recently packed away the darkroom and with it the film processing tools as well so it was sent off to Ag Photographic for processing.

On its return it was clearly the test roll I had put through a Holga Panoramic camera early last year and totally forgotten about in the meantime. Four strips of film, around 6cm x 12cm, each containing one image. I popped the first on to the small light box I still hang on to and it was immediately clear that they were all horribly over-exposed, a fact that I’d already been able to see just by glancing at them in their protective sheet. I wasn’t particularly surprised, the “controls” on the Holga 120 Panoramic are rudimentary to say the least and this was the first roll through the camera.

Undaunted I popped the first on to the scanner (a rather outdated Epson Perfection V550 that I have had since at least 2013) and fired up the interface. It took quite a lot of tweaking to get detail appearing and it took around fifteen minutes to scan the first negative. I scanned at 3200dpi (the scanner has an optical max of 6400) and saved the resultant scan as a 16-bit grayscale TIFF file.

Why did I buy such a camera in the first place? Tempted by the hype in one online review on the Lomography website perhaps?

“One could argue that its 90mm ‘OPTICAL LENS’ is a piece of crap. I would argue that the fancier competitors (e.g. Linhof, Horseman etc…) produce cold, sad, perfect panoramic shots you wouldn’t even consider hanging in your toilet. Or maybe I’m just frustrated I can’t afford one of these monsters… Anyhow, the usual soft focus and vignette produced by the dirt-cheap lens give the warmth and dreaminess we all love in lomographs”

Well, as you can see the 90mm lens is definitely soft and the promised soft focus and vignetting is there for all to see.

Well, I paid over my pennies as you can see and I took the camera for a wander down Gog Hill (above) to the Elland Bridge (first picture) and shot the allotted four frames. Then promptly forgot about it! I was probably waiting to process it with another 120 roll film but got diverted and started playing with the 35mm film SLRs instead.

What do I think now? Well, the images are everything I thought they would be so no disappointments there, but they probably don’t sit with the type of work I’m doing right now. They have taken a fair bit of work to look half decent, and I’ve not tried printing them yet. But the fact that they don’t “sit well” with my current work is perhaps irrelevant. We all experiment at times, or at least we should experiment, and these have produced images with the characteristic Holga charm. Charm is highly subjective of course and one mans charming image is another’s out-of-focus, soft piece of crap I guess.

Yesterday I was ready to ditch the Holga, even offering it to anyone who wanted it amongst my Flickr friends. But this morning, having processed the other three negatives I’m a little less inclined to ditch the experiment altogether. I won’t be rushing off to put another roll through the plastic-fantastic but it will live to see another film at some point I think. 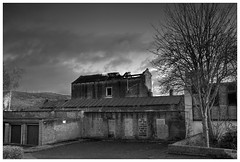